We all know that we need to try and get our head down for eight hours a night to make sure we’re at our best the next day, but statistics reveal that the average UK adult gets only 6.28 hours of sleep at night. 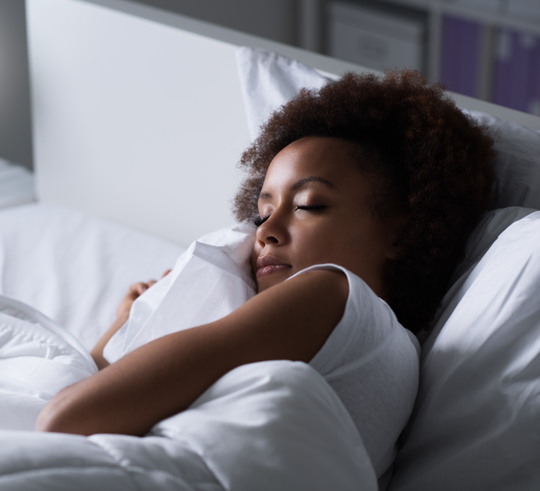 This lack of sleep can be for a whole host of reasons; 25.55% of the UK say its stress that keeps them from hitting the hay while 8.35% say it’s the snores, coughs, sneezes and twitches from the person they lay next to that stops them from sleeping. Whatever the reason may be, not getting enough sleep can have a lot of consequences for our physical and mental health, both in the short and long term. It may not come as a surprise to you that poor sleeping patterns can lead to a lack of focus and motivation, forgetfulness and, of course, tiredness, but not resting enough also means you’re at heightened risk of respiratory problems, diabetes, obesity and heart disease. Your physical health is important but so is your mental health, and in recent years a lot of studies have linked the quality and quantity of sleep with how you feel and what you have experienced.

A recent study discovered that trauma sufferers lose between 104- 129.7 minutes of sleep per night, that’s almost two hours of your already diminished 6.28 hours. The word ‘trauma’ can describe a wide range of things; it could be a serious accident, emotional abuse, separation or a medical procedure. The most common sleep problem experienced after trauma is insomnia with a whopping 79.8% of people reporting to not be able to nod off at all. Other problems are waking up frequently, nightmares, anxiety surrounding sleep and even sleep paralysis. It is important to remember that even though you may have experienced trauma your sleeping may be unaffected, or you may have experienced no obvious traumas but still suffer from insomnia, nightmares or sleep talking or walking.

Many of us may suffer from what is known as ‘acute insomnia’. This is when you frequently can’t sleep and it is usually dependent on life circumstances. It is often acute insomnia that occurs when our mind is busy worrying or we cannot switch off our thoughts. It is only when this disruption to normal sleep is sustained over at least three nights a week for over three months that you may have ‘chronic insomnia’. Insomnia is defined by an inability to fall asleep, staying asleep or waking frequently or too early. Often in cases of chronic insomnia your mental health can worsen as you battle to sleep.

Poor mental health can also significantly contribute to the appearance of insomnia. In September 2018, Paul was referred to the EIC by his employer, a large electrical wholesaler who was becoming increasingly concerned that Paul’s poor sleep and symptoms of insomnia were having a detrimental effect on his work. In one instance Paul nearly fell asleep at the wheel. Paul was suffering with extreme stress caused by his difficult financial situation and a distressing relationship breakdown which resulted in divorce.

The strain this was putting on his finances and day-to-day life was extremely overwhelming for him. Paul has been employed within the electrical sector for 21 years with his career spanning several large companies, and therefore he was eligible for help from the Charity. Upon chatting with Paul, our support team discussed the ongoing issues he was struggling with. He had experienced varying degrees of low mood and was put forward for a psychiatric assessment which diagnosed Paul with moderate depression and anxiety. The psychiatrist recommended a change in his medication and he was put forward for therapy. The link between depression and insomnia has been widely explored with much of the research pointing to one worsening the other and vice versa. It is no secret that mental health and sleep are intimately related.

It is proven that sleep disorders are more common amongst those who have mental health issues and 75% of those with depression also suffer from insomnia. Paul is within that 75% of people who live with both depression and insomnia. Paul’s case is not isolated, especially within our sector; many of those who come to the EIC for assistance suffer with mental health issues which affect both their quality of life and sleep. Robert has worked in the electrical industry for a number of years and owns his own successful electrical company, which of course comes with its own strains.

Robert initially came to the EIC with high stress levels due to overwhelming work responsibilities and a poor work-life balance. On top of these issues, Robert recently went through a distressing break-up which resulted in his diagnosis of moderate depression paired with insomnia. Robert’s insomnia began to infiltrate his working life and affected his ability to function, focus and complete daily tasks. Upon deeper investigation, Robert discovered it was his initial physical diagnosis of IBS which triggered the inability to sleep, but once he has managed his physical condition, Robert began to notice it was also his workplace and home anxieties which staved off sleep at night.

A lot of us struggle to quieten our minds at night, but Robert found himself focusing and ruminating over negative thoughts leading to his constant tiredness and worsened mental state. His temper and persona changed due to his lack of sleep and Robert found he was irrational, could snap easily and couldn’t regulate his moods. Since reaching out to the EIC and receiving a diagnosis from the private psychiatrist, Robert has undergone cognitive behavioural therapy (CBT) and has noticed a marked difference in both his insomnia and mood. He has also been prescribed sleeping medication by his GP which has further aided his return to a normal sleeping pattern.

There are many other mental health issues which can impact on our ability to sleep. Post-traumatic stress disorder (PTSD) has been widely associated with anxiety surrounding bedtime and nightmares with many sufferers developing chronic insomnia as they are too fearful to sleep. It is these mental health conditions which lead to poor sleeping patterns and sleep conditions. If you would like to show your support for those who are struggling with mental health disorders, take part in powerLottery today by simply downloading the EIC powerLottery app and tap the app to play.

Alternatively, if you are suffering with insomnia or would like support from the EIC please contact This email address is being protected from spambots. You need JavaScript enabled to view it. or 0800 652 1618.