Imagine taking your baby home from hospital for then your child to be being diagnosed with cerebral palsy at the age of nine months. This is the reality that Amy and Dean Angel faced when they took their son, Elliott, for a routine doctor’s check-up. Elliott was diagnosed with spastic diplegic cerebral palsy and instantly their world changed. 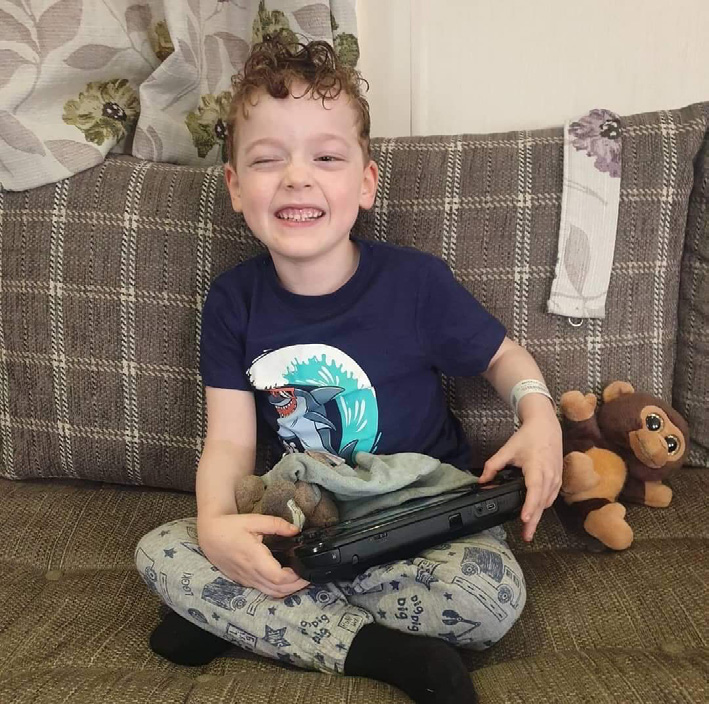 Cerebral palsy is caused by lack of oxygen either in the womb or after pregnancy and can leave sufferers with extremely stiff limbs, uncontrolled movement, learning disabilities, swallowing difficulties and speaking issues. Elliott’s mum and dad constantly have to stretch his limbs, he cannot sit unaided, and Elliott cannot be toilet trained as he has no control over his bladder or bowels.

Before coming to the EIC, Dean and Amy were trying to raise the money needed for Elliott to have a walking aid, known as a trike. They had set up their own JustGiving page and although they raised the total needed for the equipment, they were still struggling to look after both Elliott and his twin sister, Elsie, as well as doing all of Elliott’s physical therapy, as the therapy needed was not funded by the NHS. Dean came across the EIC through a leaflet and as an electrical employee since 2011 was eligible for support from the charity.

Initially, Dean and Amy came to the charity with the hope of financial assistance toward physiotherapy sessions and potentially an operation, but the EIC were able to offer Elliott and his family much more assistance than they had ever hoped for. The charity helped Amy and Dean to source specialist physiotherapy which aimed to help Elliott’s strength and resistance. This was an incredible opportunity to give Elliott the best help possible and take some of the weight of his parents who up until now had been doing much of Elliott’s training themselves. The specialised physiotherapy was based in Wales, a four-hour drive from Elliott’s home.

If the family had not contacted the EIC, Dean would have had to take the day from work, potentially unpaid, drive the family to Wales where Elliott would complete a therapy session and the family would have then travelled back to Torquay, a ten-hour day in total. As Amy and Dean had reached out to the EIC, we were able to support the family with both their travel and Elliot’s therapy sessions. The charity paid Dean’s daily wage so he could take the day from work without monetary worry and could focus on Elliot’s physiotherapy.

Recognising the importance of recovery, for all the family, the EIC allowed Elliott and his family to recover from his intensive therapy by funding overnight accommodation for the family and food vouchers to ensure they were comfortable during this difficult time. Not only this but the EIC also funded a trainer walking frame for Elliott to enable him to stand upright and walk without his legs crossing over, something he had never been able to do. Elliott began to gain freedom and could move more easily around the home without distressing himself or Amy and Dean. Elliot also received a custom-made wheelchair complete with flashing wheels and adaptations to support his development and day-to-day living. Elliott and his family continue to receive ongoing support from the Electrical Industries Charity.

Amy has struggled to cope with Elliott’s condition and has often found herself feeling anxious, low and helpless in what has been an incredibly difficult time for the family. The EIC supported Amy through hypnotherapy to help reduce her feelings of anxiety and low moods, and Amy has since improved considerably and is feeling much more equipped to manage and reduce her own anxieties. In April of 2019 Elliott underwent extensive surgery, funded by the EIC, in the hope of reducing his ongoing chronic pain caused by his stiff limbs and aid the implementation of a natural sleeping pattern. Although not guaranteed, this operation could also provide Elliott with the potential to carry his own weight and maybe even walk, something Elliott and his family had never imagined could happen.

After several hours in surgery, Amy and Dean were told the operation was a success and Elliott could begin to sleep through the night and enjoy a more pain-free life. Now, thanks to the surgery and ongoing consistent physiotherapy, Elliott is completely pain-free and the possibility of him walking is growing ever-more likely. Since the operation Elliott has continued to undertake intensive physiotherapy, and Amy and Dean continue to lift and stretch Elliott at home to aid his movement and rehabilitation. With the help of the EIC, the lives of Elliott, Amy, Dean and Elliott’s twin sister Elsie have been transformed.

Elliott now enjoys more movement and freedom than ever before, and Amy and Dean continue to be supported emotionally and financially by the welfare team at the EIC. We rely on your donations to continue to help families like the Angels through our Employee and Family programme. A great way you can help us to help our sector is by playing the powerLottery – sign up today to see what a difference £1 can make to both your life and someone else’s.

Alternatively, if you need assistance or would like to talk to a member of our welfare team then please contact This email address is being protected from spambots. You need JavaScript enabled to view it. or dial 0800 652 1618.